Starting from the first European initiative for exascale software, EESi1, Europe has developed a unique network of more than 150 academic and industrial experts, including both scientific software developers and users, to assess the impact of Exascale computing on society, environment and technology, and lead the way.

With EESI1, the first worldwide cartography of developments was issued.  Furthermore, a global Exascale software stack roadmap and an Exascale application roadmap, including fundamental research and industrial grand challenge applications was proposed.
Insights on Europe strengths and weaknesses have enabled to set priority actions, define the type of cooperation structure that should be implemented between Europe and the international community.
In 2013 and 2014, EESI2 has published its updated vision of what need to be accomplished to build an exascale capacity for Europe.

Exascale is a disruptive computing technology that addresses huge economic, societal and scientific challenges. Investment in this capability will give massive returns for Europe.

The roadmap foundation for Exascale in Europe has been set in 2011 by the European Exascale Software Initiative (EESI1).
An important outcome of experts that have contributed to this initiative was the recommendation to address the overall challenge at a worldwide level.
A close collaboration of EESI has been established with experts from Europe, and international stakeholders and luminaries from the United States and Japan (eg International exascale Software Project of The Department of Energy, and Satoshi Matsuoka executive member of IESP21).

Exchange of thoughts during international workshops and conferences has helped identify where Europe stands in the worldwide exascale race:

Some technical issues for Exascale computing, including Extreme Computing and Big Data, have been identified by EESI1.

At the level of the simulation environment, issues include a unified framework, multi-physics simulation, mesh generation tools and standardized parallel I/O and data management

At the level of codes/applications, five domains that need attention include: the efficiency of numerical methods, algorithms or solvers, the coupling between stochastic and deterministic methods, the meshless methods and particle simulation, the program scalability and fault tolerance, and the standard programming models for multi-level parallelism.

As conclusion, the development of Exacale eco-systems in Europe was seen as an urgent need to sustain leadership in such domains as research, notably in the new promising fields of computational materials design, device design, engineering applications (CFD, seismic, …), molecular dynamics, bioinformatics or life science where Europe has an outstanding position in scalable codes and expertise.

Building an exascale capability requires a sustainable, long term and coordinated effort. EESI1 has recommended to:

This roadmap includes to develop strong and focused initiatives towards exascale computing, including specific training and education programs.

With such a roadmap, the European commission will enable the deployment and use of Exaflop computing power in Europe by the end of this decade

Since the first vision of the European Exascale Software Initiative in 2011, experts have developed a periodic update of vision, roadmap and recommendations for an effective implementation of Exascale in Europe. The EESI2 vision clearly recognizes the imperative need for breakthrough on hierarchical algorithms and more technologies.

The EESI2 Initiative is clearly oriented toward the development and implementation of efficient Exascale applications, algorithms and software for enabling the emergence of a new generation of data intensive and extreme computing applications.

In 2013, EESI2 had published the first vision update. Eight key R&D programs for an exascale roadmap have been identified:

EESI has refined its vision, inspired by the various explorations, observations of worldwide recent installations in Europe, Asia and in USA of 10 (and more) Petaflops computers, and by the feedback of several applications and tests running on full configurations of these systems.

Outcomes are coherent with those of international R&D funded programs on Exascale.
The following points are on the critical path to Exascale Computing:

In 2014, given the ultra complexity and inter-dependency of extreme computing and extreme data, EESI has changed over to a new approach, data centric, to pave the way toward exascale computing

New thinking is required to develop new programming models, new algorithms, new tools, new data processing methods … not only bigger than the present ones, which will remain useless, but far beyond the required innovation. Exascale creates fundamental new opportunities, but it also brings fundamental new challenges. Exascale means exaflops and exabytes. The data centric approach is a must.

The new roadmap and the consecutive recommendations are gathered into three large pillars: 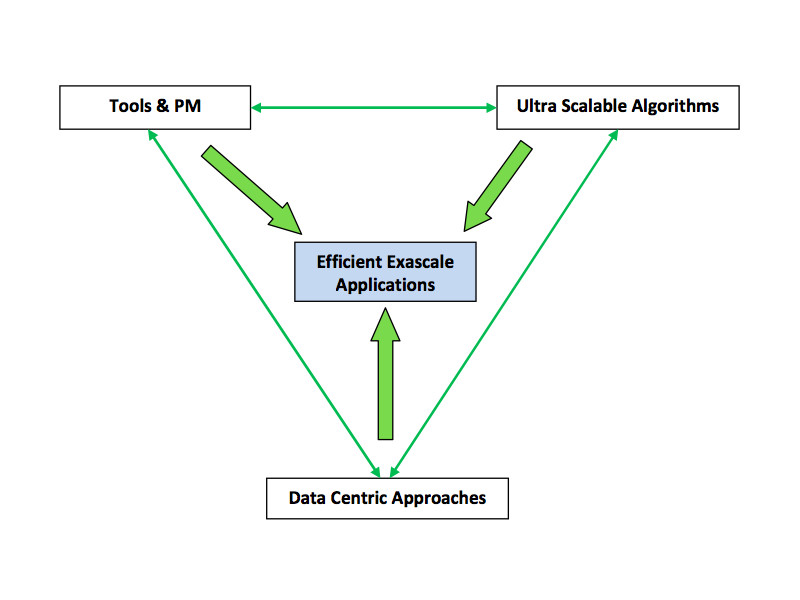 Europe clearly has strengths (applications, scalable algorithms, couplers…) but at the same time Europe is late on some Exascale key issues (languages, programming tools …). Thus the principles underlying EESI2 vision and recommendations are: