The European Exascale Software Initiative is a funded project of the 7th Framework Programme for research and technological development of the European Commission.

FP7 is a key tool to respond to Europe’s needs in terms of jobs and competitiveness, and to maintain leadership in the global knowledge economy. A large consortium of organisations work together to address the scientific and technical challenges and deliver the Exaflop performance of the new computer generation by 2020.

EESI mission is to build a vision and roadmap to help Europe develop such new generation of computing systems and achieve efficient Exascale applications.

EESI, supported by Europe, started in 2010. It has created a momentum, a dynamic, between HPC end users from academia and industry, computer scientists, technology and service providers. It has continued in 2012 with EESI2, a 34 months project.

High Performance Computing is a strategic instrument to advance scientific excellence, help humanity solve its hardest problems, and sustain industry competitiveness.
By 2020 performances are forecast to be extreme, in the range of Exascale.

The invention of computers has enabled to process data and solve problems at increased speed and complexity. Such speed is measured in floating point per second, in short “flops”.
From the 70’s until now, 2015, the computing capacity has raised from about 100 million flops to petaflops (10¹⁵).  In the last decade, the computational demand has tremendously increased with the advent of scientific discoveries, data volume generation, and complexity. This requires a new generation of computers made of millions of heterogeneous cores.

What order of magnitude? Exascale refers to thousand fold increase over current computing capacity: computers will be capable of at least one exaFLOPS, or a billion billion calculations per second, 10¹⁸ floating point operations per second.

What does extreme mean? Exascale computing power is believed to be the order of processing power of the human brain at neural level. It is also what we need to count each of the known sextillion stars of the universe in 20 minutes.

Exascale computing will be a significant achievement in computer engineering, implying outstanding technological breakthrough both in computations and in software. 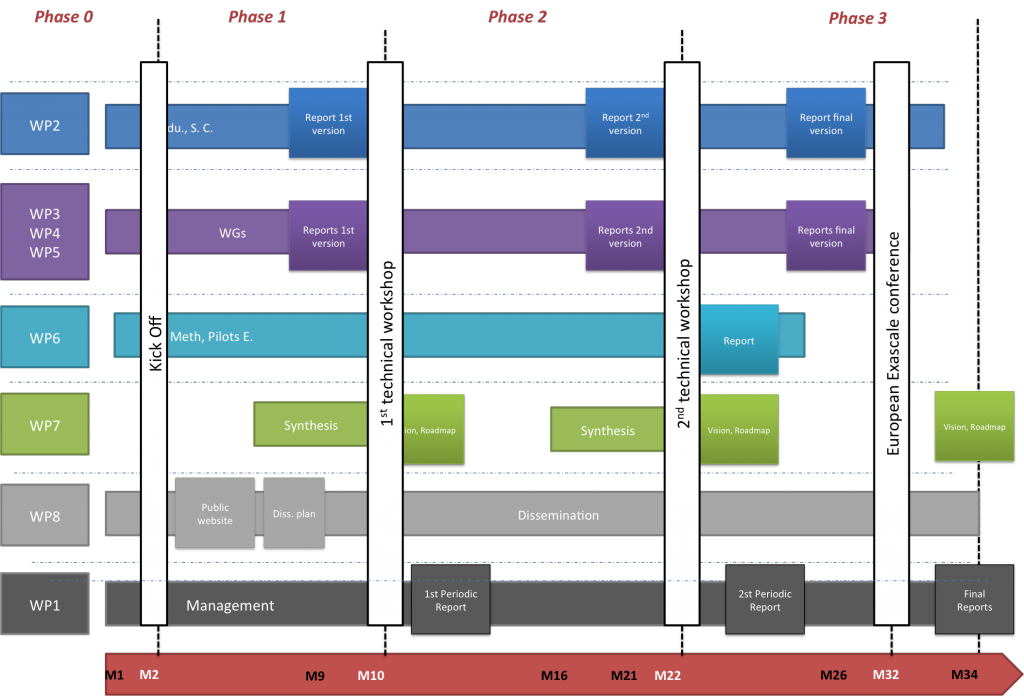 The consortium acts as external and independent representative of the European Exascale community.
EESI ambition is to support Europe exascale computing strategy by providing the appropriate guidance to build such capability and let Europe remain ahead of competition.

EESI2 is the second initiative of the type. The objectives of this project, is to focus on software key issues improvement, cross-cutting issues advances, and gap analysis.

The European Exascale Software Initiative was born in 2008 after the FP7 first call. It has been accepted as a support action of the 7th Framework Programme for Research.
The first initiative was conducted by Total.

From 2008 to 2011, the first initiative of the type federated the European community and built a preliminary cartography, vision and roadmap of HPC technology and software challenges in Europe.

From 2012 to 2015, EESI2, the second funded FP7 project, has gone a step further toward implementation. EESI2 has established a structure to gather the European community, to provide periodically cartography, roadmaps and recommendations, and to identify and follow-up concrete impacts of R&D projects.

The EESI1 work, the recommendations and vision have been presented during the conference, opened by M. Campolargo (European Commission DG INFSO) who recalled the importance of this event for the future and the necessity of a joint effort.